Gloria Had An Abortion! Par-tay!

So a beloved friend of mine who is pro-life posted an article written by another pro-life activist who was bitching about this picture: 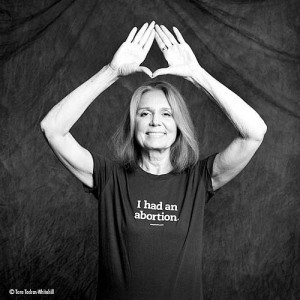 But this I'll give the writer. Ms. Steinem's tee shirt is quite possibly the most offensive, selfish, tactless, inappropriate, hateful, hurtful, UTTERLY DISGUSTING thing I have seen in a long time. I'm so pissed off by it that I actually broke out my blog because I knew a simple Facebook status update wasn't going to cut it.

First of all, I admire Ms. Steinem for much of her life's work. Without trailblazers like this woman, many of us wouldn't enjoy the freedoms we have today. She continues to fight for women to be treated as equals to men in our country - really, the world - which is an absolute necessity. Men stand to lose NOTHING when the women they love are strong, secure, educated, productive members of society. Emasculation - ha. We teach others how to treat us. "No one can make me feel inferior without my consent," said Mrs. Roosevelt.

Second, as a die hard centerist, I am a person who struggles with the pro-life vs. pro-choice argument. I absolutely positively believe that life begins at conception and will do so until some scientist comes up with definitive proof that it doesn't. Abortion therefore, to me, is straight up murder. So to that end, I lean pro-life. However, I'm also not a meat puppet whose life the government may manipulate. Nor is any other woman. I don't need Uncle Sam's nose in my uterus. Particularly in cases where there has been extraordinary emotional or physical trauma or a life is threatened. It is not my place to make anyone else's major life choices for them.  So to that end, I lean pro-choice. It's a sticky sitch.

I have always gotten irritated when one side re-names the other just to be disrespectful. I hate it when I hear a Pro-Choice person call a Pro-Life person an "Anti-Abortionist." They want to be called Pro-Life, call them Pro-Life. I PARTICULARLY hate it though when a Pro-Lifer calls a Pro-Choicer a Pro-Abortionist. Because I don't know a single Pro-Choice person who is FOR abortion. Not a single one. Every adult Pro-Choice person I've ever talked to seems pretty aware that choosing to abort is a very serious decision, one that could possibly result in destroyed relationships, future health consequences and a lifetime of regret.

Everyone except, it appears, for Ms. Steinem here. For her, it's apparently just another Tuesday. "Oh, I had an abortion, woopdeedoo! You should try it, too!"

Seriously? THAT is the message young girls should see? We should be teaching them, "Oh, no worries...if I get pregnant I'll just get an abortion" instead of being responsible about their sexual activity in the first place? Of course accidents can happen in the best of circumstances, but I'm not talking about that. And teenagers won't see that. They just see a famous, pioneering woman cavalierly supporting abortion as birth control like it's no big deal.

BUT IT IS A BIG EFFIN' DEAL.

For women who have had abortions and regret them later - THE CALLOUSNESS IS OFFENSIVE.

For women who've had no choice but to have an abortion because their health was in danger and forever mourn the child they never had - THE CALLOUSNESS IS OFFENSIVE.

For the women who've had one because they were raped, especially if they never would've considered having one under any other circumstance - THE CALLOUSNESS IS OFFENSIVE.

For the women who disagree with abortion for religious reasons (whether you agree with it or not) - THE CALLOUSNESS IS OFFENSIVE.

For the men who would have done right by their girlfriends and been great dads but were given no say in the matter - THE CALLOUSNESS IS OFFENSIVE.

For people like me who like to maintain that no one on either side of any issue is pure evil - THE CALLOUSNESS IS OFFENSIVE. And you make it impossible for me to have your back.

I love a good debate, and I have understanding for both sides of this particular one for the reasons I've already stated above, but when you figuratively stick your middle finger up at the people with whom you disagree and MAKE THE CONSCIOUS CHOICE to taunt their values, especially your own sisterhood, then I'm gonna give you serious crap about it. It's unacceptable. Part of being a real feminist, if you ask me, is to allow women to do and think HOWEVER they like, BECAUSE WE CAN, even if you wouldn't do or think the same yourself. A woman who chooses to stay home to raise her children should be considered just as much of a feminist for making that choice as a woman like me who consciously chose not to marry or have children in favor of her career. Shouldn't you, Ms. Leader of All Things Equality, have figured that out by now? Is that not what you've been fighting for all these years?

Shame on you, Gloria. That tee shirt doesn't make you a feminist. It makes you an insensitive jerk.


wonderfully stated. the whole argument in one place. i have always felt that if the two sides could just negotiate a middle ground. teach contraception, teach responsibility for ones actions, and accept that there are occasions that termination of the pregnancy is the only choice. thank you for putting it into words that i hope a lot of people read!

Well said. Thank you for taking a chance and putting this out there!