Feeling unmotivated is a dangerous place for Darci to be. It's different from just feeling lazy...lazy for me means, "I'm taking the day for myself. I'll watch a movie or two, maybe read a little bit. Make the conscious decision to shirk responsibility because I need a break." Lazy can be healthy on occasion.
However, unmotivated means, "I'm in a rut. I don't know what to do or where to focus next. IS there even anything to do or focus on? And if I do manage to get my ass in gear I'll probably manage to screw it up..."
And just like that, Dark Darci has broken into the building, taken Delightful Darci hostage and beaten her right back into submission.
I was wondering why I woke up feeling this way when I'd been doing so well recently and I have to attribute it to two things of which I'm aware:
1) I've had a sinus infection the last couple weeks that just won't quit (actually I think it turned into a little head cold, but don't tell Delightful Darci, because she's choosing to believe that "even now her body is restoring itself to its original state of perfect health and well-being."). Turns out I'm not a very good patient. Prolonged under-the-weatherness tends to wear on my attitude faster than anything else that presently comes to mind.
2) My neighbor Matt, he who can MacGuyver a back yard into a full fledged mini-amphitheater, is back in the hospital with pneumonia...and most likely numerous other things that he will not tell me about. "I'm fine, dear, I'll be fine."
Those who know me and participated in Angels Over Nashville will recall that a couple days after we put on that fundraiser, Matt was hospitalized for a collapsed lung. He had about one week after he came back home where he was full of energy and could not stop eating (he definitely needs to eat) but after that he started hiding away in his apartment for a few days at a time. Now, Matt hasn't been well for years. He was born with health issues and had, if I remember correctly, something like 70 surgeries on his feet by the time he was five years old. But he's the Terminator, you can't stop him, nor will he EVER say no to someone he cares about and when you say "keep it simple," that to him signifies, "pull out all the stops." The weather got unseasonably cool during this time, so I assumed he was feeling achy and taking it easy, because having had a few surgeries myself, I know how incision locations can be uncomfortable during drastic temperature changes. I never allow him more than three or four days of disappearance though, before I call him or let myself into his apartment to check on him. This time on the fourth day, I left him a message asking for his advice on how I should paint a piece of furniture I'd just bought (he's always refurbishing things), but didn't hear back. By my other neighbor Chris later that evening, I'd found out Matt was back in the hospital.
Without regaling you, dear reader, with the details of his health issues over the years (many of which I probably don't even know), I'll simply say this: it appears he will be in the hospital for some time - and I personally fear that it doesn't look good this time. And I'm not sure what to do about it because I am terrified that if - God forbid - he never comes home that I'm the one to blame. Between my birthday party in May and A.O.N. in June, I believe he planned and designed and hauled and lifted and built and painted and constructed and decorated way way way too much for his body to handle (he's freakishly strong for someone of his frail appearance, but I think he's also in a bit of denial about how much he can take, too). The doctors suspect he had that collapsed lung a good couple or three days before we even did the show - and he kept working right through it. My pleas to keep it simple went naturally ignored, as did my questions about whether he'd put anything in his body other than white wine and cigarettes all day. He's not been the same since he got back from the hospital after A.O.N. And he did that for free, for me, simply because I asked if we could do it.
I'm afraid I'm killing him.
So I'm unmotivated and in a funk and in a strange mental suspension. Not to be macabre or anything, but if he never comes home, life as we all know it at Riverton Bowl will drastically change. We, his neighbors, have had this at the back of our minds for a long time, now. This isn't Riverton Bowl without Matt. What was once a dirt mound in the middle of a strip of auto and industrial shops, Matt has single-handedly (and out of his own pocket) turned into this little Eden: 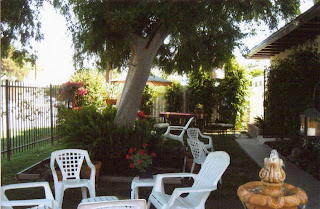 This is my front yard.

With his bare hands he made this stage for my birthday party and the Angels Over Nashville benefit: 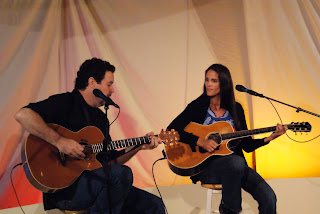 ﻿And this lovely set up for the audience and party goers: 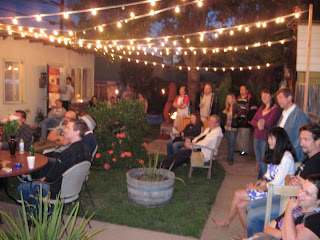 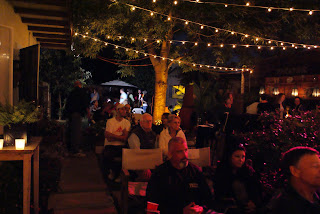 If my pilot lights go out, he comes and lights them for me. He often shows up at my door with something he found at Big Lots that he knows I could use. He painted my coffee table for me. When I approached him about teaching voice lessons at home his response wasn't to complain about all the noise it would make but said, "Well it's about damned time you decided to make some money with those gifts of yours. At least SOMEONE in that apartment will be singing!" And now, he waits to water the lawn till my voice lessons are done for the day. He never orders a pizza without asking if I want to order, too. He bought me a welcome mat simply cuz he thought I needed one. He asks me every spring what color flowers I would like in the planter in front of my window. He feeds my cat, DangerPickleKitty, whenever I go out of town. He leaves copies of Cabaret Scene magazine wedged in my door when I'm not home. He brought me a flower one day because the day before I'd had a bad day. When one of our neighbors was out of work, Matt offered to pay him to go through his mother's LP collection and inventory everything (in which they found a 78 of the Jackson 5 signed by Tito, Jermaine and yes, Michael Jackson, worth a minimum of $3000). And every holiday season, starting on October 1st, he decorates lavishly for Halloween, Thanksgiving and Christmas.
Many of these are things I cannot do, or wouldn't actually think to do myself. Whomever comes after him certainly won't.
Most importantly, if not for Matt, I might very well have ended up homeless five years ago. Times were very rough for me and I was looking for an apartment with a bankruptcy on my record. No one - and I mean NO ONE - would rent to me, despite the facts that I'd been at a stable job for two years and that my mother was even willing to cosign. When I came to look at this place, both my options and time were rapidly running out. I could tell Matt, who was acting as property manager for the purpose of showing the apartment, took a shine to me immediately (as 99.9% of gay men do) and said he'd put in a good word for me. He told me later that after I left he immediately called our landlord and said, "I want HER." Landlord said, "Well I have to check her credit and such," and Matt said, "There's a bankruptcy, but I don't care, I want HER to be my neighbor and I'm not letting anyone else look at the place. If you want to show it to anyone else you'll have to come do it yourself." And just like that, it was done. Thank God, thank God, thank God for Matt. Two weeks later and I would've been on the street, but instead I was moving in next door to a chain-smoking, wine-drinking, award-winning lighting/set designer with the patience of Job, the heart of a lion, a gifted green thumb and a knowledge of musical theater I'd dare anyone to best.
Don't get me wrong. Matt's my neighbor and he still finds ways to annoy the crap out of me, cuz that's what neighbors do. Blasting original Broadway cast recordings and gay icons at decibal eleven with his front door open is one of them. But I'd be okay to hear Barbra's machine-gun vibrato or a few very loud bars of 42nd Street right about now. I just want him to come home.
I'm not sure my heart - or my conscience - could deal with the alternative.
(If you'd like to comment on this blog, you are most welcome to, but please do not privately email me about this. I don't want to have discussions going on in several different places. In fact, I don't really want to discuss it any further than this at all at the moment. Thanks for understanding.).
Posted by Darci Monet at 6:39 PM 0 comments