Soooooooooo...I'm a terrible cook. I mean that in a way that actually means I never learned to cook. When I was growing up, Mom had a lot on her plate as a very young mother (with eventually four kids) and whenever I asked to help, her response was something like, "Honey, it'll just go faster if I do it myself. Go read or something." I get that. Kids in the kitchen are A LOT. Hell, I was a lot. So...never really learned. I did weasle the family Italian meatball recipe out of her back in college though and I have since perfected them in my own special way (they are seriously the best...I get marriage proposals and everything...I don't think you're ready for this jelly), but outside of that I make a mean scramble, a kickin' egg salad (referred to as "crack salad" by some) and a chicken salad that'll clog your arteries (worth it). End of list.


My meatballs. ↓ See? Don't you wanna marry me? 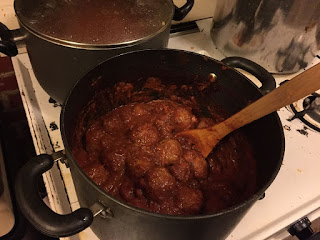 So last year (2015) my only New Year's resolution was: COOK MORE. And so I did. But this really broke down to grilled cheese, frozen pizzas, Uncle Ben's Ready Rice, Trader Joe's orange chicken and lots and lots of salads, for the most part. I am completely clueless when it comes to whipping up something easy and good for me from scratch. Knowledge of spices and what they're for outside of garlic salt, oregano, basil and crushed red pepper? Absolutely zero. And the irony? I'm actually the social media goddess for this awesome cooking web series: Dish It Out with Tony Spatafora. Yeah. #wahwah

So 2016 is: COOK MORE WITH REAL FOOD. A lil history: by the time he was my age, my mother's twin brother had had a quadruple bypass. Their father passed away at 52 from his second heart attack (on Christmas Day - thanks for the memories, Grampie! ♥). I am a juicy girl (unapologetically) and in the past have done every unhealthy, dangerous diet in the book, including mutilating my innards with surgery, in an effort to conquer an old, desperate, misplaced need to be thin (barf). As a result, I not only yo-yo'd my weight by 100 pounds and back again more than once, but have managed to demolish my metabolism in the process. So, when I turned 40, I did start making significant efforts toward eating more balanced over all, severely limiting fast food intake and getting more exercise, but when one of my best friends in the whole wide world, only a week older than me, nearly died of a heart attack on this past New Year's Day, it was really a wake up call for me. While I'm proud of the changes I had already made with the intention of loving myself and for no other reason, I knew I could and needed to do better, because between my family history of heart disease, my effed up metabolism and making a living sitting in a chair 98% of the time, I am potentially looking at the same thing sooner or later. Combine this with the fact that the prior six months I had been a complete sloth, didn't care what I ate, didn't get off my butt and move, was a total couch potato throwing pity parties and not giving a rip that I was (for reasons I won't go into, but if you read back in this blog you might get some clues)...

One Friday night, feeling sorry for myself that I was sitting home alone with my cat AGAIN (because my attempts at online dating have been laughable at best - but that's another Dr. Phil show), I suddenly got a wild hair and thought, "I am going to try and make Mom's chicken and rice soup. Right now. I have nothing else to do." I had bought a rotisserie chicken from the Ralph's that was terribly bland (Pickle wouldn't even touch it and he LURVES him some rotisserie chicken!) and didn't want to be wasteful and throw the whole thing away cuz 'Murica, but I knew I wasn't gonna eat it. So, I just went for it. Threw the whole thing, skin and all (minus the leg I ate) in a pot, loaded it with water, a can of chicken broth and the only spices I owned (read: three different kinds of poultry seasoning - why do I own three different kinds and where did they come from??? - an Italian spice blend, garlic salt, pepper, lemon pepper and sage). The only vegetables I had in the house at the time were a bag of lettuce, a bag of spinach and some mini sweet peppers. So, I cut up the mini peppers and tossed them in.

I had NO IDEA what I was doing. Zero. But my house smelled AMAZEBALLS.


I will start being impressed by technology when they
start making computer screens scratch-and-sniff. ↓ 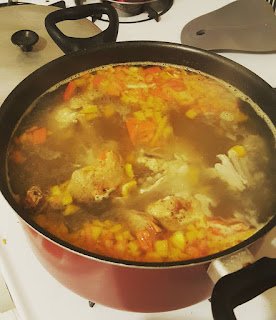 After the chicken started falling off the bones and I spent an hour separating said bones out (Sweet Lord, there's gotta be an easier way - suggestions welcome), I made a BIG batch of brown rice - which of course, stuck to the bottom of the pan because rice is IMPOSSIBLE, PEOPLE - but 99.97% of it went into the soup. I let it all sit together for about 20 more minutes. Lots of stirring.  Then I chopped up some spinach and threw it in mostly for color, cuz I'm creative like that (*cough*).

I was terrified. I had no idea what was going to happen. It sure looked and smelled beautiful...but how would it taste? I mean...I had NO proper ingredients in the house. I wasn't gonna get out of my pajamas and go buy what I needed, either. I was just driven to DO SOMETHING. ANYTHING. So, I did it. 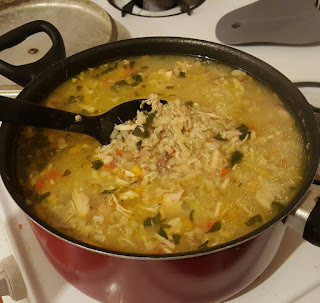 And somehow, by some Christmas Miracle, it tasted like this:

Campers...I HAD MADE SOMETHING FROM NOTHING, which I haven't had the heart to even attempt in a long, long, loooooooooooong time (just ask me when the last time I wrote a song was. Go ahead. Ask). And it was delicious. And it was healthy. And I did it MYSELF.

Turns out, I might actually be able to cook.


Since then I have taken careful steps toward becoming Chef Darci. I am slowly building my spice collection. I have made buttloads of chicken stock to use instead of the canned kind. I made quinoa for the first time and it was a success (so much easier than rice AND more health benefits!). Yes, I paired it with Trade Joe's orange chicken because a) I'm still too scared to try a main dish yet and b) ain't gonna lie, that shizzle's tasty. ↓ 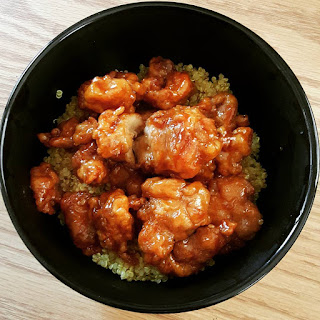 Getting braver, I made quinoa again with chicken broth, garlic salt, minced garlic and my new favorite spice, turmeric (good for inflammation, I hear - and I'm a walking ball of it) and a side of fresh spinach, sweet peppers and onions sautéed in coconut oil, garlic salt, lemon pepper and again, turmeric (seriously, it goes in everything I can get away with now). Chicken is courtesy of Ralph's (much better than the bland one I made soup with, which turns out was a no added salt version and I didn't notice that on the bag when I bought it - but if I had...there never would have been EPIPHANY SOUP!)...and YES I KEEP THE SKIN ON. That and my coffee the way I like it will never change so shaddap.  Anyhoo...OH EM GEE, were those side dishes DEELISH! The spinach/quinoa mix has now become a diet staple for me. Easy to make, loaded with nutrients and slap-yo-mama yummy! ↓ 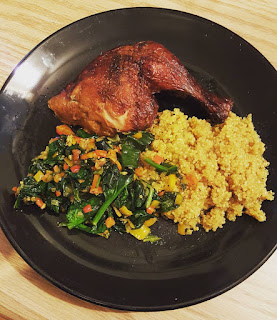 For the record, the first main dish I will be attempting to make is this mega delicious blackened ahi tuna sandwich I had the privilege of tasting in person on Dish It Out, as soon as I have gathered all the spices I need for their lip-smackin' blackening seasoning recipe. Although I will probably just eat it fresh out of the brand new little cast iron skillet a sweet friend gave me because it's just that yummy on its own! 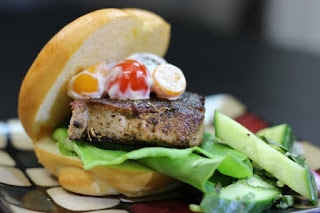 But today...today...on my first day off in two straight weeks...I will attempt a complete sacrilege. Because my aim is to make delicious dishes that are also heart-healthy, I will be trying my hand at making MY FAMOUS MEATBALLS with - *gulp* - ground freakin' turkey instead of the ground beef and *secret ingredient meat of epic deliciousness proportions* that I normally use. See? A SACRILEGE!!! This means that to make it taste good, or to remotely honor my Italian roots at all, I will have to play with spices more so than I do with my original recipe. Oh, my God...I'm feeling light-headed at the thought. I don't really think you people realize how this crushes my ego to use ground turkey in ANYTHING, let alone MY MEATBALLS. But I shall prevail! I shall make them DELICIOUS, so that every once in a while I can have a little indulgence that will carry me through to Italian Christmas with my sister, or a party with friends, when I bust the REAL ones out.

So, anyway...I think I've rambled on enough and you're probably wondering what the actual epiphany is, other than the possibility that I might not be entirely hopeless in the kitchen after all. Basically it was: got fat rump off couch, did something that scared me, created something from nothing...and DIDN'T FAIL for once. I really, REALLY needed that. I needed to create, I needed it to WORK and mostly, I really needed to do something loving for myself because I hadn't in so very long. And taking care of my body - in ALL its juiciferous splendor - and doing it deliciously is LOVING MYSELF. I can live with that.

Well, off I go to try the turkeyball experiment. If it works, no doubt I will post an update. Cross your fingers!