Give Teddy A Home!

(Update 3/1/10: Teddy has been saved! He will be moving into his new home with his new mom on Wednesday, March 3rd!)

Ok...I'm not really an animal person (I'm a baby person) but this puppy is too freakin' cute...he looks like a hot fudge sundae! And he desperately needs a loving home. If you're in L.A. and would like to adopt him, please get in touch with my friend Ron at iamrondavis@aol.com asap. And if you can't adopt him, please spread the word!

This adorable little guy got left behind by his owners (who were literally giving him away on the street saying that they were taking him to the pound if no one wanted him). We couldn't bare it so we took him to my house, but cannot keep him. We are looking to find him a good home (preferably with a yard he can play in!)

Teddy just got back from the vet and has a clean bill of health and his shots! He is 5 months old and is a mix of Sjitzu and Lhasa Apso according to the vet. Right now he is about 12 pounds and will be just 20 pounds when he is full grown. Teddy is truly a baby. He is curious, loving, semi-house broken (he's pretty much gotten it down), and he sleeps through the night quietly. He is truly a little doll. Great disposition, and so so so cute!

If you or anyone you know might be able to give Teddy a loving home, please let me know! 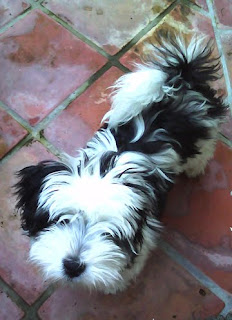 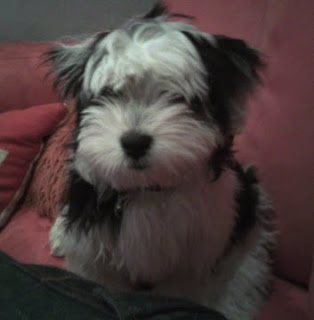 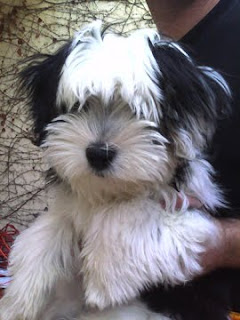 IT'S AMERICAN IDOL TIME!
Join me for my reviews and friendly discussion...
FIRST OFFICIAL REVIEWS OF SEASON NINE ARE UP NOW!Click the banner below:

Mark Twain said, "Forgiveness is the fragrance the violet sheds upon the heal that has crushed it."

I heard this statement for the first time last week while driving home from Las Vegas, listening to Dr. Wayne Dyer's "Excuses Be Gone" CD series, in which he quotes Mr. Twain. At that very moment I was embroiled in a personal situation with what now appears to be a former friend in which I could not begin to imagine even an ounce of forgiveness creeping into my heart. But when I heard that I almost had to pull over because it broke me immediately and suddenly I couldn't see the road through my tears. And here a week and a day later, still struggling with the concept, I am watching Louise Hay's "You Can Heal Your Life" and who happens to be on it quoting those very same words but  -- wait for it -- Dr. Wayne Dyer.

It should be noted that my little sister was supposed to take the Dyer CDs on her cross country move to Chicago but they accidentally ended up in one of my bags instead. It should also be noted that I've had this Louise Hay DVD from Netflix for...oh, I don't know...a solid 6 months now. Mysterious ways, indeed.

I'm not really a grudge-holder. In past disagreements with friends, when given the opportunity to discuss the problem with the offended/offending party, I can agree to disagree, I can admit and apologize when I'm wrong, I can accept an apology if it's given and then I can throw it all away, never be used as ammunition later. I'm over it, just like that, clean slate. But I am struggling with how to forgive someone who did a terrible thing to me in retaliation for a terrible thing I said and won't allow me the chance to try and make amends. This is a totally foreign concept to me. I've certainly made mistakes in my relationships. I've made MISERABLE ones, a hundred times more heinous than this one. And yet I've never been disallowed from apologizing for my mistake. I also can't recall a time when I've not allowed someone who hurt ME to try and make amends. And man, I've been HURT. And I know I MUST forgive, because I cannot control others, so I must do it for myself. I MUST go forth in Love with this person, whether I ever receive it back or not. And chances are I won't.

And so I am struggling. I don't know how to keep this from becoming a cancer in my heart. Am I the one violet on the planet without a fragrance?

Tomorrow I'll read that last sentence and no doubt decide that it's cheesy as hell. So I apologize for it in advance. But right now it stays, because I'm feeling all emo and stuff.

In the midst of this turmoil, however, I have learned that I am still somehow lovable. I just produced a benefit for Haiti relief with the proceeds going to Doctors Without Borders. Friends stepped up to the plate when it counted most. And yeah...all these people know I'm annoying and sometimes have no filter and yet they like me anyway. Or at least they know my heart's always in the right place and therefore can tolerate me. That's probably more like it...but beggars can't be choosers, right? But I digress...

The benefit certainly did not go off without a hitch, but it went off anyway, which I'm pretty proud of. Our modest but generous crowd brought in almost $1200 for DWOB. My talent was AMAZING, from the insanely funny Suzanne Whang who opened with standup and played emcee for the night, to Melissa McLaughlin, Trenyce and the incomparable Debby Holiday. They all gave 150% to their performances and completely enthralled the crowd. I am grateful. And while I am relieved it's over, cuz that's A LOT of work, I want to do it again. I think my next venture will be the NoH8 Campaign. Not TOMORROW...but next.

First I have to get my voice back so I can actually sing in the next one. Yes...I'd been doing so well...and here I am, post-nasty-cold-I-came-down-with-in-Vegas, and can barely squeek out a sound because my cords are so trashed from coughing. It's been awhile since I've had to cancel a performance because I was THAT sick. It begs the question, "Why are you bringing this upon yourself, Darci?" In my efforts to try to really know myself, break apart my own denial and fingerpoint the crap that makes me do what I do so I can get RID of it and NOT do what I do anymore, I can't seem to zero in on this one. Now perhaps this particular instance is easy...I hadn't planned to sing in the benefit in the first place. I had enough to do as the producer. But the last person I was waiting on a confirmation from wasn't able to make it work, so I had to step in. A week later I had a head cold, four days later no voice. I pulled myself out of the line up. Simple. Never wanted to sing...subconsciously made it happen.

But it's a little extreme, don't you think? Now I've jacked up my ability to make a living for a few weeks, because EVERYTHING I do requires my voice! Teaching voice lessons, singing, and my babysitting job one day a week. Why would I do this to myself? What is it I'm fearing? What is it I must not want? It makes no sense, because I do WANT to be singing, all the time!

And there it is. *DING* I literally had a lightbulb moment as I sit here typing. I am in an eternal state of WANTING and never actually HAVING. Nearly every day for just about as long as I can remember I've been saying to myself - and occasionally to someone else - "I just want to sing. That's all. Just want to be singing." I can count on one hand the times I've said to myself, "I AM singing," or "I'm a singer" or "I sing all the time." And almost NEVER, "I sing all the time and make my living at it." If all this law of attraction la-dee-da is true and it's the vibration of feeling you put out there that attracts a like vibration of feeling, then I am most definitely guilty of putting out vibrations and feelings of lack. Duh! *smacking forehead* It's no wonder that most of the time I'm scraping by! It's no wonder I struggle with throat and respiratory issues a lot and have MY ENTIRE LIFE! Which leads me to...

OH MAN the things we're told when we're growing up and what we let them do to us! Looking back on my life, God was used as a weapon of mass destruction upon me. When it came to singing, someone ELSE other than ME decided when I was "spiritually ready" to sing in church or not. I was often told that "IF it was God's will" I'd have a career in music and that if it was going to happen then He'd present the opportunities to me and maybe then I'd be ALLOWED to have my dreams fulfilled. You know what this taught me? That God and I were never on the same page, He would never allow me to have anything I wanted and it paralyzed me from really getting off my patootie and pursuing my calling because I kept waiting for Him to hand it to me on a silver platter. And when opportunities DID arise...I was so terrified they were tricks disguised by the devil and not really of God that I'd get sick. And then I could blame missing an opportunity on sources outside my control. And THEN I'd beat myself up over it, calling myself a failure, never forgiving myself...sometimes for YEARS.

AND CLEARLY I STILL DO THIS!!! What's been going through my head all week and since the benefit? Darci's Blame-Herself-Into-A-Bloody-Pulp Game. What could I have done differently? What could I have said? What could I NOT have said? Why didn't I do this? Why didn't I do that? Why DID I do this? Why DID I do that? I should have...I shouldn't have...I meant to...I didn't mean to...if I could've had this...if only I'd known...if I had double checked...if I'd KEPT MY BIG MOUTH SHUT...

I am the heel crushing my own violet.

Well, whaddaya know. I suppose I should quit doing that before I worry about what kind of fragrance its giving off, yeah?
Posted by Darci Monet at 9:14 PM 0 comments